“I remember getting a lot of college brochures in the mail back when I applied, and I can’t tell you now what a single one of them looked like,” he said.

The ones he recently has helped bring to life for Hampden-Sydney College in Richmond, Va., certainly don’t look anything like those staid, repetitive marketing pitches from a higher education institution.

The Swagalog viewbook boldly goes where others are afraid to go, both in terms of look and content, combining 50s retro design elements with big infographics and a focus on manly things, which was the goal for this all men’s college.

The first of is volumes was released last fall and to critical acclaim. Officials at Hampden-Sydney say that their new creation led to a 54% spike in applications, no small feat for a small, private liberal arts college during the COVID-19 pandemic. So, they’ve commissioned another one that is set to hit mailboxes in the coming weeks, and one later in the year.

“After the success of the Swagalog’s first edition, we knew we couldn’t take our foot off the gas,” said Jeff Norris, Hampden-Sydney’s Vice President for Enrollment. “And with the second edition, Familiar Creatures has proved yet again to be an essential partner in introducing Hampden-Sydney to prospective students and their families in a fresh, creative, and unexpected way.”

Yes, print is alive … the same way that a internet’s home page or high-style magazine might attract an impressionable young adult’s attention. But the viewbooks aren’t standalone products: they pair neatly with the university’s Swagablog website, which offers new articles weekly plus videos of alumni who appear in them. The concept gives current students and perhaps new ones a space to connect between editions.

The print versions are worth waiting for.

Inside, there are offbeat stories and visuals that contain clever, targeted messages such as the two-page spread featuring several fish with the simple title: “If our students were fish, they’d have plenty of space to swim: 1000+ acres, 1000 students.”

Another article discusses an academic path that has become near and dear to the hearts of scores of young adult males and has parents shivering with fear: gaming. Entitled “Proof that you can make a career playing video games,” the story features one grad who is, Trey Keeler, now a brand manager at Riot Games. 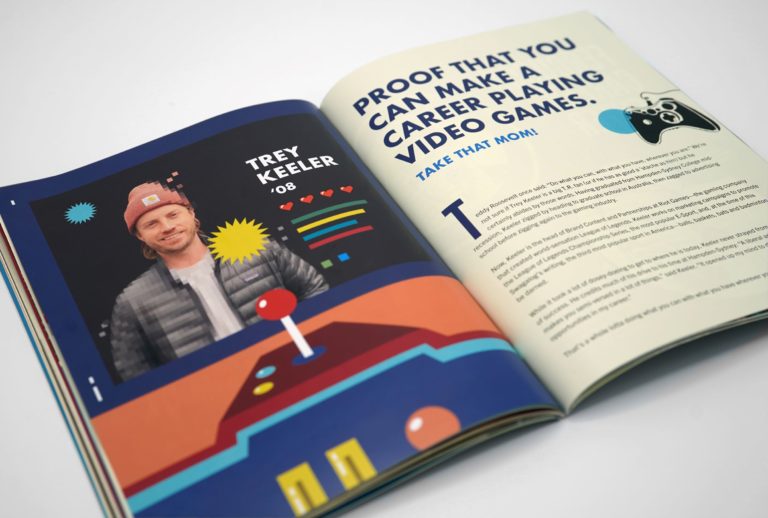 From culture to history and touching on all the right buttons to reach its audience, the university encapsulates its messages in quirky, if not a teen-humor-friendly way. Beyond the words and story angles, the attention to artistic detail really wows readers.

“When it comes to The Swagalog, the visual design makes it almost impossible to forget,” Burnett says.

The edition even includes a poster for a mock music festival called Lolla-bro-looza.

The lesson from Hampden-Sydney to other institutions: Be bold, be stylish and be transformational when creating viewbooks. And give prospective students a little of the unexpected: this institution known for forming “good men and good citizens” and created in 1775 wasn’t afraid to chances and it paid off.

They were still able to deliver targeted messages, including two that resonate in large reverse headlines: “Ranked No. 2 Alumni Network in the Nation by The Princeton Review” and “Voted most fun college by everyone in the universe. We checked.”

The Pitch: Advertising and marketing news for 3.9.21